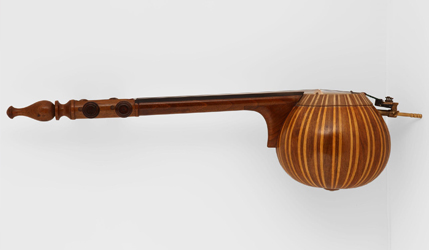 Kamanche has been mentioned in many of old primary and contemporary Iranian textbooks and manuscripts. This instrument is quite old, since it has been mentioned in “Majmalolhekme”(brief Persian translation/ekhvanosafa/10 A.C.) And also “Ashjaroasmar”(1288 A.C) by AladinAlishah bin Mohammed bin Qasem.(Mohamad-taqi Masoudieh- Iranian instruments)

“Ibn-e Faghih” is the first one who has mentioned the word “Kamanche” as an instrument as it had been much played in the areas “Sindh” and “Egypt” in the 9th century A.C(Mehdi Foroogh- music magazine no. 9- 1336 ordibehesht)

There are different sayings about the history of kamanche, as Masoudieh says in the book “Iranian Instruments”: “In the music textbook of Haji Hossein Zahiri Esfahani and also Asrar-e- Charom-e- Seyom in musicology qeychak and kamanche have been mentioned as the same instrument.”

The same thing has been claimed in the contemporary scripts: Kamanche has been considered by Roohollah Khaleghi as the improved version of Rebab in the first volume of “the history of Iranian music”: “The mentioned instrument (Rebab) which has had 2 strings at the beginning and latter another string was added to that, is played with a bow and is the same thing as we today call Kamanche.”

“Since Safavid era kamanche has been considered as one of the Iranian music origins.” He adds.

Sasan Sepanta mentions kamanche in the book “ the perspective of Iranian music” along with the other instruments such as Oud, Tanbour, Chang, Qanoun,
Ney, Tabl(Drum) and … which have been painted in the old Iranian paintings. He adds in another script: “kamanche goes back to the ancient times.we see a musician playing kamanche in the painting Isfahan Chehel-sotoun’s wall painting which is remained from Safavid era. Kamanchehad three strings before, and after arriving violin to Iran in Mozafareddin shah era, the fourth string was added to it.”

“Sorahi” which literally means “glass of wine”, is carved according to the taste of the designer and is placed at the top of the woodcrafted fingerboard- above the Pegs Box.

It is placed under the Sorahi and above the Nut and is the joint for the Pegs.it is made of the same material as the fingerboard and its size depend to the length and width of the fingerboard. There are 8 holes_ four on each side- in which the Pegs are installed.

They are four wooden pieces shaped as solid cylinders, at the bottom of each there is a wide cap designed in different shapes for the player to hold them.

The cylinder part of the Pegs enters the Pegs Box from one side and joins the other side. Each string is sealed on each Pegs inside the box and the player tunes the strings by the Pegs. The Pegs are usually made out of walnut, but they can be made from any other kind of hardwood.

It is a piece made from bone or some kind of hard wood like walnut or ebony, which is placed between the fingerboard and the Pegs Box.

The strings cross through the grooves made on the Nut and are directed towards the fingerboard.

Fingerboard is carved in the shape of a solid cylinder from walnut wood (or any other kind of hardwood) and it is shaped as an upside-down cone. In some kamanches, bone or some kinds of hard decorative wood likejujube, ebony, and etc. are used for the upper side of the fingerboard (under the strings).

The fingerboard does not include fret setting and the player would hold the fingerboard with the left hand to have fingring on the strings.The  fingerboard is usually 29.5 to 31 cm long and its width on the upper side is between 33 to 33.5 mm, and on the down side between 29 to 30 mm.

It is s a piece made from wood which joins the two main parts of instrument: fingerboard and the resonance box. The size of the bottom of fingerboard differs according to the maker. This part plays an important role in stabilizing the resistance and the angle of the fingerboard with the resonating chamber.

The resonating bowel is a hollow sphere which is made by some bent twigs pressed closely besides each other. The number, material and size of the twigs differ according to the maker’s pattern. But the most common forms are made from berry wood and consist of 12 to 14 twigs. There is an opening on the upper face of the resonance box which is covered with .

There are also some kamanches which are not made out of twigs and are called “en bloc”. In some instruments the outer surface of the chamber is decorated with some pieces of shell or bone.

The hide which is used to cover the opening of resonating chamberand on which the bridge is placed is made from the processed  of animals like goat or lamb. It was common to use the hide of cow’s belly in the past, but nowadays the lamb’s hide is generally used.

The material, thickness and restitution of the hide is directly affective on the sound of the instrument.

The bridge is made from wood, which is placed on the upper opening of the resonance box by its two small legs, and the strings that are attached to the Pegs by one side and to the tailpiece by the other side are placed on it. The size and dimensions of the bridge including the length, width and height differ according to the other parts of the instrument.

Kamanche has four strings which get tuned with some certain intervals in between: Sometimes fourth intervals or fifth intervals and another kinds of tunes.

The strings which are currently used in kamanches, are metallic and their ends are wrapped with thread, and there is a hook-form on their end to be attached to the tailpiece.  Although the violin strings are better in quality. They are not usually used in making kamanche since their size does not fit it. But recently some violin strings have been manipulated to be used in kamanches.

There is a metallic tailpiece, on the down-side end of the instrument, under the resonance box and on the leg, on which the strings are attached by their hooks. Tailpiece on the current kind of kamanche is placed at the end of some mechanical screws called “tendon”. The player can tune the strings in smaller ranges(to one fret). These tendons are exactly the same as the ones in the violin.

The Pin can be divided into two parts, the inner part and the outer part. The inner part is metallic (usually brass) and is placed inside the box. One side is joined to the fingerboard and the other has exited the box and the tailpiece and tendons are attached to it. Naturally this part of the leg is not visible. but the outer part of the  pin is the same piece of metal which is at the bottom of the instrument and is attached to the inner pin.

This pin is between 10 to 12 cm long. While playing, the instrument spins around this pin.

The word “archet” (a French word used for “bow” in Persian) got commonly used after violin entered Iranian music.

The bow is a narrow cylinder piece of wood that is almost 60 to 65 cm long. The bow hair is obtained from horse tail and its belt which is a leather belt and the right hand fingers are placed in it to tune the bow hair.