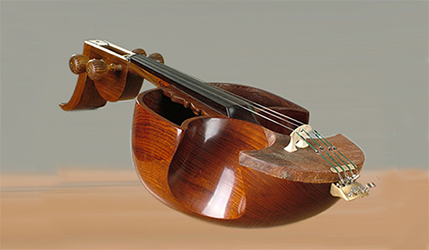 Qeychak is one of the string instruments, played by a bow. it is made from wood, hide or metal. It is used to play Iranian folklore music. In some of old Iranian poetry books and also some of Islamic textbooks, this instrument is mentioned as “qajak” , “qazak”, “qachak” and “qaj” and therefore it is presumed that qaychak has been one of the prevalent instruments in old Iran…..

Qaychak is played by a seated person, held vertically with left hand, and the bow is drawn on the strings horizontally. The length of the instrument is about 60 cm. and the main components are resonance box, fingerboard.

1.Taj(the tip of the instrument)

Qeychak has four pegs –equal to the number of strings- shaped as a flat pin which are located on the sides of pegs box. In the pegs box each string is sealed to the thinner part of the peg. They are used by the player’s left hand to tune the instrument. The Pegs are usually made out of walnut, but they can be made from any other kind of hardwood.

Nut It is a piece made from bone or some kind of hard wood like walnut or ebony, as wide as the instrument’s fingerboard, which is placed between the fingerboard and the Pegs Box. The strings cross through the grooves made on the Nut and are directed towards the fingerboard.

The main body is made from wood, usually walnut, blueberry, or other hard-wood material. Resonance Box is big and two notches divided into two parts, with one part bigger that the other one. The smaller part is at the bottom and its aperture is covered by hide(skin) and the bridge is located on it. The bigger part’s aperture is uncovered and fingerboard joins it on the middle.

It is usually made of sheepskin or the processed of animals like goat or lamb which the bridge is placed on it. It was common to use the hide of cow’s belly in the past, but nowadays the lamb’s hide is generally used.

The material, thickness and restitution of the hide is directly affective on the sound of the instrument.

The bridge is made from wood placed on the hide of smaller box of the resonance by its two small legs, and the strings that are attached to the Pegs by one side and to the tailpiece by the other side are placed on it. It is almost 4 cm high but the exact size and dimensions of the bridge including the length, width and height differ according to the other parts of the instrument.

Qeychak has four strings made from metal. The 4th string is the thickest one and is covered. The length of the strings from the tailpiece to the nut is about 50 cm.

There is a metallic tailpiece, on the down-side end of the instrument, under the resonance box, on which the strings are attached by their hooks. Tailpiece on the current kind of Qeychak is placed at the end of some mechanical screws called “tendon”. The player can tune the strings in smaller ranges(to one fret). These tendons are exactly the same as the ones in the violin family.

The kamanche or the violin’s bow is used to play the qeychak.